Where Is My Mind?

“Your head will collapse

If there’s nothing in it

And you’ll ask yourself

Where is my mind?”  -The Pixies

Climbing is not all about being physically strong. This is what I love about this sport- our success is largely dependent on our mental strength. I find this fulfilling, otherwise I might decide to be a meat-headed weight lifter in the gym.   That being said, the mind can be your greatest asset or biggest weakness in projecting a difficult rock climb.

Projecting a route at your physical limit involves failing. A lot. How you deal with repeated failure is what ultimately determines your outcome. Will you back away from the challenge or will you keep trying and eventually succeed?

Chris and I have been in Las Vegas for the past few weeks and I’ve been trying a climb at the Secret 13 wall called Where Is My Mind (5.13c) — one of the hardest sport routes at Red Rock.

I’ve looked at this climb for years and have always thought it appeared impossible.  I’ve seen some really strong dudes get their butts kicked on this route.  There just aren’t many holds, and the ones that are still there have been known to be continually breaking, leaving less and less stone for the grips.

I recently had the pleasure of climbing with Brooke and Robyn Raboutou here in Vegas, and they checked out the route.  Brooke impressively sent in four tries, and Robyn did really well.  They both really enjoyed the movement and inspired me to give it a whirl.

To my surprise, I was able to do all the moves.

What I didn’t tell you is I spent about an hour sitting on the rope trying to figure out the crux, and I’ve tried the route a dozen times by now and still haven’t even two hung the darn thing.

But I’ve done all the moves- I know I can do the route.

Most highly successful people have only achieved their success after repeated failure. My favorite failure to success example is Walt Disney. Early in his career, the iconic film producer was fired by a newspaper editor for a “lack of imagination and not having any good ideas.” Walt’s first cartoon studio went bankrupt, and he suffered many criticisms for his work. He was told Mickey Mouse would never make it on the big screen- it would only make women scream.

“All the adversity I’ve had in my life, all my troubles and obstacles, have strengthened me… You may not realize it when it happens, but a kick in the teeth may be the best thing in the world for you.” -Walt Disney

I see so many strong and talented rock climbers shy away from routes as soon as it takes more than a few tries. They’ll say they need to come back to it after they train harder, or just say something like they don’t like the style and avoid it altogether.

But physical strength isn’t everything. I’m certainly a far stretch from being one of the strongest climbers, but what I do have is the mental ability to deal with repeated failure and I know how to work hard. I’ve also had to deal with a number of hardships, like the death of my mother as a teenager. These kinds of traumatic events and hardships in life can destroy you and you can live the rest of your life as a victim. Or they can make you tougher and stronger.   I strived for the latter.

In my veterinary school application letter, I wrote that living through my mother’s death was the hardest thing I’d ever gone through. If I had the strength to get through that hardship I knew I’d have the mental toughness to endure the rigors of vet school.

It worked. And it was true- I did have the tenacity to get through it. I’d like to think my acceptance into this highly competitive program was my mom’s gift back to me.

And so maybe, as Walt describes, these “kicks in the teeth” were the best things for me.

Of course it’s not necessary to have tremendous hardship in order to succeed, but it does prepare your mind to deal with difficulty. In a world of instagram and insta- gratification, we sometimes forget that anything worth doing often takes time and effort. There is a direct correlation between difficulty and time invested with worth and value in anything we do.

Here are seven tips for projecting a difficult climb.

Chris and I are here in Vegas for another week before we head back to Colorado.  It’s not a lot of time for me to succeed.  I know there is a good chance I won’t be able to do the route this time.  It’s a gamble.

But when in Vegas I’m going all in.

And I’ll ask myself “Where is my mind?”

After staring down this micro-crimp on Die Reeperbahn, 13b in Boulder Canyon, Colorado, and falling off, I broke down and cried. I was disappointed in myself and thought I wouldn’t be able to do the crux. I realized shortly after how silly it was to get so upset, and the next day out I sent the route.      Photo credit: Jon Glassberg 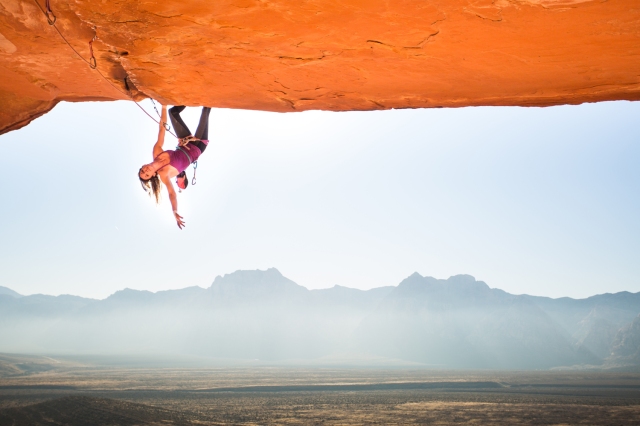 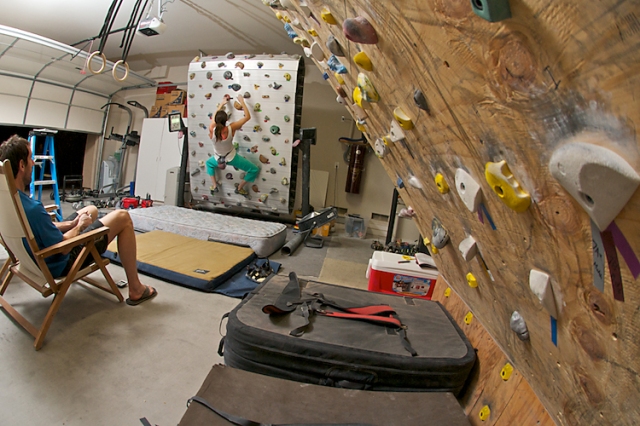 Above all- have fun! I miss my sweet Sammie Dog.
Photo: Celin Serbo

← All in…
First Ascents and Capsized Canoes on the Green River… →